So I started binging on different articles today and figured we need our first Random Links of the Day for the year 2021. So with that said, here we go

Five Ancient Wonders of the UK

A New Yorker finds old photos including a Portrait of Susan B. Anthony

A Breakthrough in Quantum Photonics will create new optics

The Juno Spacecraft will explore Jupiter for Four more years

The Dagda (The Good God)

Deep Ocean plastic is a Haven for Life

Paying Mother Nature Back For her Hard Work

The Blakiston Fish Owl, World’s Biggest Owl is in decline. But it’s not too late to save them

Mummy with a Gold Tongue found in Egypt

Happy 2020 everyone! I’m sorry I’ve been gone for so long. I have been busy. I moved out of my home last year and it took me until now to get properly situated. I rebuilt my clientele from scratch (apparently a lot of people here have Supernatural problems). I also had to make changes in the mail for letters to get to me and etc.. My guides seemed to have adapted better than I did.

I performed a very elaborate ritual that my new landlord liked very much. He’s not used to seeing magical rituals. And especially not from so many different cultures. I will still be calling myself Miami Magus because I am from Miami. And I’ll still be visiting every few months.

I will still be open for consultations. The ritual I did was one in which I transferred the guides from my old apartment to this house I currently live in. Eventually I did travel back to my old neck of the woods to visit my masters. A lot of the Elderly people I knew died. And I came to pray the novenas with my Godmother.

Her friend was both a Santero Elder as well as a priest of Palo Monte. The man had dozens of guides when he died. As was customary in Palo, his Godchildren and people of his faith appeared to figure out what to do with the guides. Some of them ended up with my Godmother. The other spirits decided to be set free and sent back to nature.

But one apparently stayed around and told the people there that he wanted to come home with me. Now, nobody told me this until recently. This spirit is a Native American chief, from Cuba. When people think of Native Americans, they usually think of North America. But Natives can be found all over Latin America and the Islands.

As a matter of fact, several North Natives settled in Cuba as well. And this spirit lived in an idol he used for native magics. After the rituals were done, I was informed only today as I was leaving that he desired to be with me. It looks like some of the Elders debated whether this was acceptable or not. After all I am not a Palero.

But since I study and work with Native spirits even here in North America, my Godmother convinced them that he was meant for me. I saw him in a vision and brought him and his idol with me. Now he’s in his new home. I have done rituals to introduce him to my house and to the Gods and spirits here. He was welcomed home and now has his own altar with offerings.

So, a new year, a new spirit. I am very happy to start this new year off this way and with this first blog entry. Have a great year everyone!

As usual, I’m always on the look out for a good read or blog to share with all of you. I found a nice one here. Good for reading before bed, warm in your covers after a hot chocolate. A rarity for me. A fascinating Blog, she travels around the world. I recommend a follow. 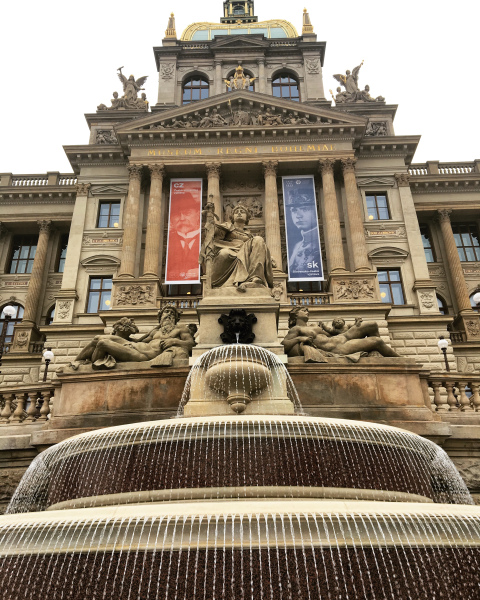 Hey. 3 months ago I moved to Prague. Because of work, blog and other duties I didn’t have much time to explore Prague as much as I would like to.

On 28 October 2018 – the day of the 100th anniversary of the Czechoslovak Republic the historical building of national museum in Prague was re-opened after long-term reconstructions. Museum introduced 2 exhibitions:

and you can read about each of them in links above. I found both of the exhibitions very interesting – for me a Slovak girl living in Czech republic it was very fascinating to see/read about Czechoslovakian history.

What’s most important thought: In celebration of re-opening of the building, 100th anniversary of Czechoslovakia, 200 years of national museum – well there is a lot to celebrate and museum knows it. That’s why they offer

FREE ENTRY until the end of…